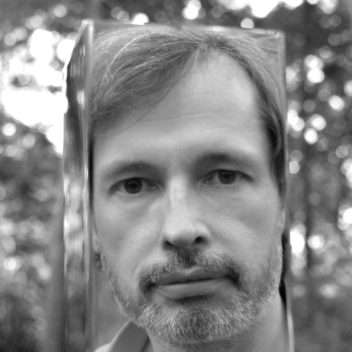 In the woods that dominate the hills along the bend in the Hudson is a place where history and art identify one with the other in a fantastic natural setting. Artworks coexist in harmony in the wooded area. The sculpture of Francesco Arena fits perfectly into this setting. Five totems of polished bronze form a circle, a family portrait, almost an abstract flavored conversation, which finds its gauge in the point of view of the figures themselves. The five sculptures are portraits of a family. Nancy and Giorgio with their children Eve, Robert and Stella. They are portrayed only through the distance of their eyes from the ground. In this way, the artist is not representing us looking at the sculptures and the portrayed subjects, but their gaze, their point of view. Almost as if they were looking at us and not us at them, in a sort of exchange of visions. An unexpected dialogue between us observing the sculpture and the sculpture itself, which concurrently answers back. The sculptures look at us with their totally abstract dimension. Neutral in the form and in the mirror-like nature of polished bronze, they are activated by a point of view.

In addition to being an active subject of vision, the family of sculptures embodies, through its gauge, a specific point of view. Not only an outlook but also a stance, a perspective corresponding to an attitude, a way of looking at the world. The geometric dimension allows the group of sculptures to observe the surrounding world from a specific point in space, from a certain height, but also allows for the combination of multiple directions. The sculptures could be looking at each other while building a conversation, but together may also address whoever is in front of the sculpture, magnifying the terms of the visual conversation.

For several years, the artist has been working on a main theme: the attempt to create a relationship of gazes capable of activating his work. The formal aspect is therefore subordinate to the modalities of vision, an element from which one could derive an indication of how to expose any work of art. However, what Arena wants to show is the reverse perspective, that of the artist’s gaze. Like in Garrison, also the work set in Pantelleria shows five elements casting a gaze. If in Garrison it was a family, on the Mediterranean island it is the artist’s that develops through various heights, building a series of different perspectives across the sublime landscape of the Mediterranean island. This relationship between landscape and sculpture materializes in a gaze that is also evident in the artist’s romantic relationship with nature. An element of Sturm und Drang which defines a precise ratio between the presence of the artist and the surrounding landscape. This also highlights the relationship with the work of Caspar David Friedrich, present in the clear relationship between individual, proportion and landscape. The artist is looking for a parameter to identify a presence, a track in relation to a context. The symbolic landscape so dear to Friedrich is transformed by Arena into abstract symbols and geometric patterns, which preserve a number of existential values. If in Pantelleria we are obviously looking at a self-portrait, in Garrison the same formula is applied to the family portrait. A sort of existential minimalism, in which the typical features of an artistic movement after World War II is combined with historical and personal facts that produce conditions with strong human features.

Within one environment, directions are defined that cross the space and create dominant perspectives, translations of facts, happenings, events that punctuate both our individual and collective lives. This whole process transforms experience into form, time into space. The determination of the place, of historical events and their interconnections produces parameters which yield a series of creations in the form of sculpture, installation and performance.

As can be understood from the title Posatoi (Perches), the work seeks to materialize the precise moment of the gaze setting onto something. A deep gaze that focuses on a detail, addresses it and perches on it. A gaze into the other, highlighted by one of the most significant characteristics of this group of sculptures, namely their mirroring facet. The osmotic trait that links the environment with the bronze elements is the most accurate metaphor to show an association between history and nature. Elements which bind strongly through the artistic act. A family portrait that also becomes a reflective gaze of a thought that looks for a deeper connection between the place, its origins and the potential that this place offers. The pieces in the grounds become more and more intense in the natural context, without altering it. The bronze reflecting surface also creates a sort of framework within the natural landscape, showing and at the same time hiding, descending into nature.

The works of Francesco Arena are known for the elegant balance between collective history and its translation into a personal dimension. The references to his biography are often the framework on which Arena founds his own research. These coordinates allow him to combine his way of looking at the world through a specific historical context and its physical identity. Individual and collective, personal past and history are merged together to create a single dimension in which concentration, geometry and solidity become the pillars of a historical-personal metaphorical dimension.

The transformation into art of the personal history of an individual who interprets the world through his own physical and existential status becomes a central element in the reconstruction of a future thought. It is here that one of the central elements that characterize the monumental dynamics embedded in the artist’s research finds its expression. The analysis of the past, the present and the translation of these dimensions into specific materials: bronze, stone, steel or marble are materials that point to a direction that develops in a future temporal space, defining the terms of a hypothetical memory.

To transform the collective identity of a historical period through time is one of the main actions produced by art. This is also evident in the artistic research of Arena, who solidifies into abstract, geometric and anti-form forms. Historical definitions related to the experience of past generations. His works call for a double register. On one hand, the attempt to give continuity to the memory of moments of history, on the other, the recovery of formal elements which are part of a historical dimension of art. The second avant-garde movements are often revisited in his work through new perspectives.

In this way, Arena sculpts a double landscape. One that is both historical and artistic, placing the figure of the artist at the center of a process of reconfiguration of history in which he is personally involved.

In term of performance, as in the works in Reims, France or Como, Italy the act that defines the various historical dynamics is often based on the idea of the wearing away of matter. At the center of the work produced in Como in 2005, there is the tragic event of the Beslan school, including the detail of the lack of water which caused many casualties. The event is invoked through a geometric vision of history, and materializes in the evanescent perimeter of the gym where the tragedy took place, outlined with water and thus doomed to evaporate quickly. To recover the boundaries, the shapes, transforming them into other matters, and re-offer them as performance or sculpture, is one of the central strategies in the work of the artist.

For Arena, sculpture is a movement that develops from a point x to a point y. An equation that puts together a historical element, a personal one and a formal one. The dynamics of these elements is expressed through the sequence of contextualization and de-contextualization movements. It brings to mind the concept of deterritorialization by Gilles Deleuze and Félix Guattari. The rearranging of facts and events into other logic systems allows the highlighting and the amplifying of the facts themselves. Art has this ability and in Francesco Arena’s work the effects of such a process define new ways of thinking and remembering.

In analyzing all of Arena’s projects, we realize that most of them are linked to political and social events. Yet, one cannot trace his work back to a category of artists characterized by political and social activism. The analysis of history from the point of view of measures, proportions and perspectives gives his work a different slant. The point of view has a double register. On one hand the interpretation of historical or personal facts and circumstances, on the other, the way one looks at them. The gaze activates the elements, connects and draws them together. The sensorial calculation of proportions in Arena’s sculptures and performances is used to translate the facts of recent history. In a metaphorical sense, the artist’s eye looks at a number of events that have marked the entire twentieth century and are the basis of his artistic research. A gaze into the world,  into history, but also into the particular, into detail, into the minute distance that often makes the difference.

This creates a distance between historical and personal facts and artistic work. A distance that creates a field in which one can look at historical moments from an abstract point of view. Arena’s geometries are necessary to look at an abstract history of facts, distracted by a contextualization that leaves the history of Italy in an unsolved state, like in a novel by Leonardo Sciascia.

Arena’s work defines an intersection of gazes. The gaze of the artist, the work, the visitor and the facts mentioned all come together into a dense network. The geometries and volumes that appear in his work—the intersection of two or more historical, social or personal events – are the result of this algebraic stance. The personal gaze onto a collective moment becomes the formula that causes the perspective to become central to the dialogue of art. It is not only the way to see the artwork within space but also the artwork itself which opens a gaze, which sees a situation. It is the artwork, i.e. the conjunction between history and artist that expresses a point of view, an opinion.