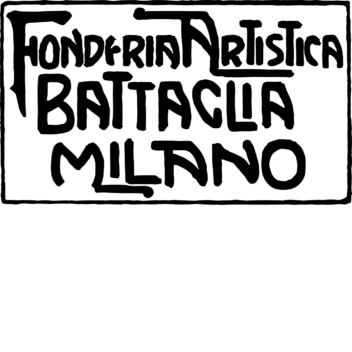 Ever since its foundation, Battaglia has manufactured artistic bronzes by lost-wax casting, a technique based on pouring molten metal into the hollow core left by melted wax. The wax model (positive) is made using a silicone mold that reproduces a precise and detailed copy of the original artist’s model. The spurted wax model disappears when placed in special hot ovens to dry out the mold. This method guarantees the most detailed and refined surface textures.

Throughout the years, Battaglia has cast works by artists such as Arturo Martini, Francesco Messina, Ludovico Pogliani, Marino Marini, Giacomo Manzù and, after the Second World War, Luciano Minguzzi, Giò and Arnaldo Pomodoro, and Lucio Fontana. Among the many renowned artworks produced by Battaglia are the majestic bronze gate of the Duomo di Milano by Giannino Castiglioni; the statue of the Madonna della Guardia by Narciso Cassino (one of the largest casts at that time, 14m high) and the gate of the Duomo di Siena (1958) by Enrico Manfrini. Yet Battaglia’s most famous artworks, the ones for which it will always be remembered by future generations to come, are RAI’s horse by Francesco Messina (1961); the copies of the Byzantine’s Horses above the Basilica di San Marco in Venice; Arnaldo Pomodoro’s Spheres in the Vatican’s Cortile della Pigna and the Sphere outside the ONU’s headquarters in New York; Floriano Bodini’s monument The Göttingen Seven in Hannover and his renowned Holy Door of the Basilica di San Giovanni in Laterano for the 2000 Jubilee in Rome. Among other artists, Battaglia is currently in collaboration with Giorgio Andreotta Calò, Francesco Arena, Kengiro Azuma, Giuseppe Penone, Benedetto Pietrogrande, Michel Saint Olive, Abdullah Selim, Nico Vascellari, Serena Vestrucci, Vihls, Velasco Vitali, and Peter Wächtler.

Since 2013, Fonderia Artistica Battaglia has researched into a variety of surface finishes and possible patinas for bronze. Battaglia has catalogued over 150 different chromatic reactions, thus generating one of the most important archives for patinas in the world. The foundry’s Department of Scientific Restoration and Conservation is under the direction of a conservator trained at the Opificio delle Pietre Dure in Florence. This allows for the preservation and study of both ancient and modern bronze sculptures. In 2014 Fonderia Artistica Battaglia began an experimental project involving some of the most important professionals of the contemporary art design scene.